Friday. Taunton to Frome, with stops at Glastonbury and Bruton. 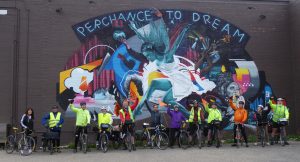 The morning saw us assemble outside the Brewhouse Theatre – over a dozen of us setting off for Glastonbury.

As one of the locals pointed out half way to Glastonbury I had managed to pick a route that included almost all the possible hills in the Levels. But basically it was flat.

So off we set for a straightforward ride to Glastonbury. We had decided not to use the canal towpath to Bridgewater as originally planned but to go by way of Barrow Mump for a coffee stop. Unfortunately the message didn’t reach all and someone who stopped almost immediately to take a phone call promptly carried on along the towpath – meanwhile we waited on the outskirts of town until he got back with us.
Regrouped we had a pleasant ride out through North Curry to Burrow Mump, where the pub was closed until 12:00 so no coffee there – after a conflab we decided to press on along the main road 3km to Othery where surely there would be somewhere – as indeed there was. A couple of Taunton riders needed to return home at this point, but the rest carried on.
I think the nice little village baker with cafe was rather overwhelmed by a dozen or more cyclists all demanding tea and cake – but they coped and we were on our way without loosing too much more time.
On the back lanes and droves approaching Glastonbury I was surprised to see the scale of the continuing peat extraction – I had thought that had stopped as being unsustainable, but not so. 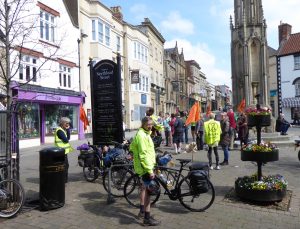 Into the centre of Glastonbury to be met by a gaggle of supporters and wellwishers and fresh riders, who took us to lunch in the back garden of a place just up the road – excellent home cooked curry type dishes, even if I was talking so much it had almost all gone by the time I noticed 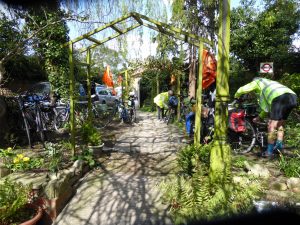 All too soon it was time to mount up and be on our way.
The new riders included four from Bruton cycling club who had come down on their lightweight road bikes to escort us up the valley.
And an excellent job they did of it – shepherding us along with leader and back marker and introducing the discipline of group riding – warning of traffic, holes and other problems and ensuring the junctions were properly covered. Many thanks to them.
With their help we made Bruton more or less on time for the cakey tea. Bruton turns out to boast a hill – which we had to cycle up twice for the benefit of a gentleman of the press.

It also boasts a very narrow bridge over the River Brue which gave Euan the opportunity to practice blockading a bridge in preparation for our assignment to come on Waterloo Bridge. 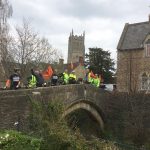 The Mayor’s Tea was excellent as were the cakes – so of course we lingered longer than we should.

One of the Bruton riders was able to carry on for a few miles with us to put us on the right road to Frome – which he did, and waved goodbye and we promptly took a wrong turning and got a bit lost.

Fortunately we noticed before too long, but it had been a long day and we were getting a bit tired. On the way into Frome Ewan kept promising “that’s the last hill” and then uncovering another one.

At last we arrived and there were a crowd of the local group complete with banners patiently waiting our somewhat tardy appearance – including the three who had ridden down from Bristol to join us for the last two days to London. I was so stressed out I promptly fell off while dismounting – most ungainly. Henceforth my flagpole was less magnificent 🙂