Tuesday. Liskeard or Pengover Green via the inspirational Pentiddy, the closed Gunnislake bridge, a cyclists lunch in Tavistock and back up and over the Tamar to Launceston. Only 54 km.

Well it may have been shorter in miles horizontally, but not vertically. And my legs were certainly tireder. But in many ways an excellent day. The weather continued kind and there were some stonking descents to enjoy. And socially it was wonderful.

Ewan and I had ridden out in the dark the two miles in the dark country lanes to Nikki & John’s where we were staying at the end of the evening before. Both had slight mechanical problems on the way, but we got there.

Wonderful hosts, lovely house (John a builder and beautifully done with many good features in the way of insulation, heat pumps, panels, battery storage and productive plot – with a wonderful view towards Dartmoor.

Euan had stayed back in Liskeard with Ian B who was joining us to London, and they rode out to meet us in the morning as Pengover Green was on our route – so Euan and I got an extra half hour in bed and an excellent breakfast.

Nikki and John joined us to ride the few km up to Pensilva (the first climb of the day) to visit  Pentiddy as they had heard of it and the natural burial ground.

Pentiddy is an inspirational place. Ele and Anthony are doing exactly what needs to be done – living lightly on and with the land in community. On 10 acres of scrubby moorland esge sheep pasture they have created a community woodland largely coppiced for wood products and fuel, a natural burial site, some allotments, a productive garden able to largely feed themselves and family, a beautiful self-build low impact house and they run various community engagement events and more – check out their website http://pentiddy.co.uk/ for a glimpse.

Ele showed us around and provided tea from the Kelly Kettle (an obsession of mine) and fruit leathers made from their own produce for energy. Then it was time to hit the road.

When I lived in Pensilva in the mid 80’s it was a very different place – two food/general shops, two butchers, a hardware/garden shop, a garage, a pub straight out of Straw Dogs (a notorious 1971 Sam Peckinpah film set in this part of Cornwall), and a small school . Much has changed – only one shop and the school remains but the pub has been smartened up and a thriving community centre was built for the millennium.

A long but nasty descent from the village high up on the shoulder of Caradon Hill down to cross the Lynher –  a narrow lane with cars appearing on blind corners – followed of course by a steep and long climb back up through Golberdon to nearly our original height. Golberdon boasts a slightly unusual use for a redundant phone box – this one houses not a defibrilator or book exchange but the village tart.

Round the north side of Kit Hill from Kelly Bray – a bit more climb then along Hingston Down descending ever more steeply into Gunnislake. An interesting navigation choice by Miss OSM (if you haven’t seen my previous bikeblogs Miss OSM is the routing software that I regularly do battle with – but she is generally helpful, if wilful) saw us sent down a lane that narrowed to a track that narrowed to a path that narrowed to be a tight squeeze to fit a bike with panniers that ended with some steps back onto the road. Totally unnecessary as the usually busy main road was traffic free since the bridge was closed to cars. 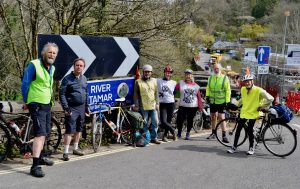 A reception party awaited on Gunnislake bridge (closed to traffic for a month while they repair damage by a car – this bridge was not built for speeding lumps of metal) – Calstock and SE Cornwall XR including some to ride with us to Tavistock.

After a photo call on the bridge leaving Cornwall (for the first time) it was away for the long grind up to Gulworthy and the watershed between Tamar and Tavy. This photo was used by the Cornish Times for a very sympathetic report.

Being able to ride on A390 up the valley side with no traffic was wonderful, normally this route is not suitable for cyclists apart from the heads-down-bums-up-road-bike-brigade. All roads should be like this.

And down again back to the lowest level of the day for another reception party in Tavistock – people with trays of elderflower cordial, vegetable crisps, flapjacks. 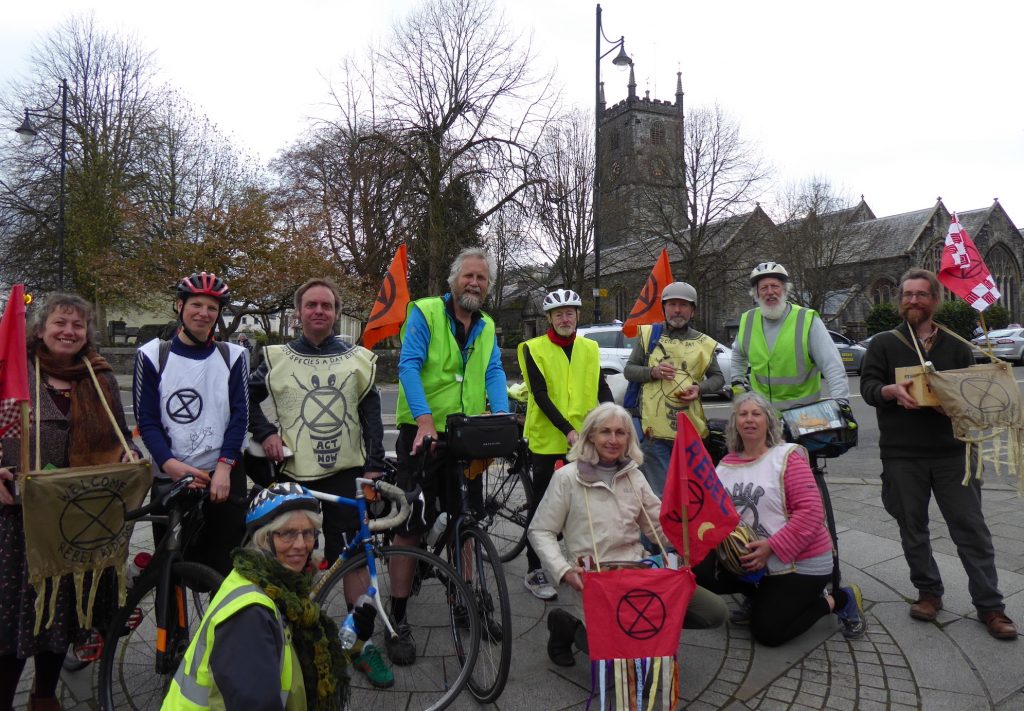 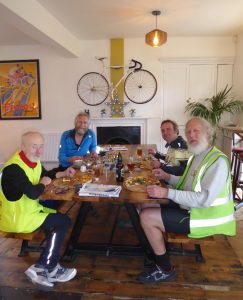 The wonderful Martin at Tavistock Cycles who built Genie (my bike) kindly fixed a problem that had developed with my front brake (I’d forgotten to check and change the disc pads before leaving home) while we had lunch at Church Lane – a bike themed cafe/restaurant with pizzas designed for famous riders (I had an Eddy Merckx, and very good it was too) – and a 10% discount for cyclists. What’s not to like?

Leaving Tavistock we hit a down point on an up hill – road closed, back down to the bottom, Ewan falling off (he seems to do this once on every trip) – but no damage done. A slightly longer and more traffic route was found and up we climbed again towards Milton Abbot.

The second of the great descents of the day followed – Gullworthy down towards Tavistock was the first, and now from above Milton Abbott down into Chillaton.

After corresponding climbs two more good fast descents followed: Markstone down to Tinhay and finally Lifton Down down to the Tamar. In between there was a stop at Lifton Farm Shop for a giant pot of tea all round and then back into Cornwall for the final climb up into Launceston. A very tiring day, but well worth it.

Total 54km at an overall rolling average of only 11.1km/hr and a top speed of 62.5km/hr. A most pleasant evening in the Bell (many thanks Richard and Colin for the good company and conversation , lets not mention the singing!) and to bed knackered. Tomorrow we hit the high road to Barnstaple.