Saturday. Frome to Newbury featuring a coffee stop in Trowbridge then a bumpy canal path to Devizes and lunch followed by a smoother but hillier passage to Newbury. And a pause at the A34. 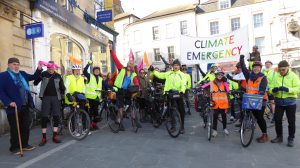 Well a good group joined us to leave Frome in good heart for the ride to Newbury. I think we were well over 20 riders as we pedalled away through town. Including the three strong Bristol contingent. 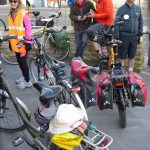 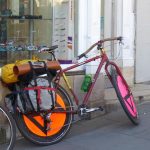 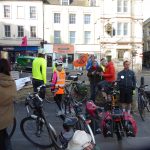 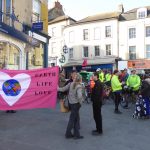 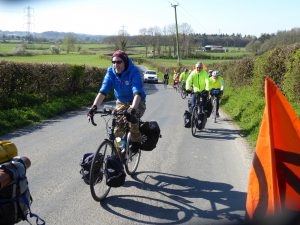 The first target was Trowbridge where we planned to meet two more riders who set out from Bath that morning.  Of course we were a little later than intended getting going as we waited for one more member who had business back in [su_tooltip content=”another quote from a song – artist and title please for points…and what do points mean?” class=”dots”]town[/su_tooltip].

A lovely morning ride through the countryside back lanes, chattering as we went. With a lot of new riders joining in en-route to London this was a far more talkative day; which perhaps helped to slow the pace. 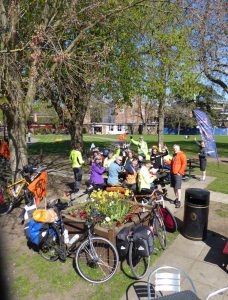 Stop for coffee in The Park in Trowbridge centre at the kiosk. One person serving one cup at a time…time passed.

Checking Critical Maps we could see that the Bath pair were already ahead of us and off towards Devizes up the canal.

Eventually we reassembled, counted, recounted, decided all were present and headed off to find the canal – the last few day riders from Frome waving goodbye.

The canal towpath when we found it was BUMPY. Loose large gravel and ruts, fortunately dry. Ok, if uncomfortable, for those with fatter tyres, but a nightmare for those on narrow slick road tyres. Unfortunately consulting the map showed no sensible alternative so we pressed on.

Towpaths are ok for cycling on as a solo touring rider – but in a group they are doubly difficult as they are essentially single track which means bunching up and problems every time it goes up a short, usually very steep, slope at an overbridge, and where the path continues under the bridge it is very tricky if anything is coming the other way.

Fortunately no-one ended up taking an involuntary swim, but we did have the odd puncture. The actual scenery when you got a chance to take it in was nice, but mostly you have to concentrate on the path immediately ahead.

Eventually the Devizes locks hove into view where the whole group reassembled and joined with our two from Bath – Amy and Dylan, mother and son aged 12 carrying his own kit and a very competent and experienced rider. Great to have him along.

The cafe at the lock was overloaded so we headed into town to take a lunch break. Devizes was supposed to be an early lunch, but we were far from early so we agreed 45 mins and dispersed to various watering holes leaving a pile of bikes around the cross. Unfortunately Ewan and I decided to try a pub and another group were upstairs in a nice looking cafe – in both places service was seriously slow. It was well over an hour later by the time we emerged.

Finally we managed to get back on the road, nearly 2pm with 60km still to go, an arrival in Newbury by 6pm was looking unlikely. Still the weather and the riding were good. The route now on decent lanes, undulating but not a lot of traffic and good progress was made. 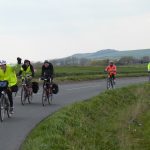 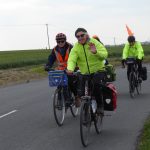 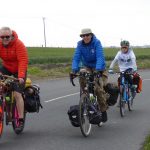 Pewsey 20km further on provided a chance for a quick cafe stop (this was supposed to have been the goal for a slightly late lunch, but hey ho so it goes). Onwards onwards through the changing countryside. Some people were getting a bit tired by now, but spirits still high.

We reached the village of Great Bedwyn sometime about 6pm – still 20km to go. We waited for a trailing group to catch up and had a brief conflab about how best to proceed – concerns about getting to the hotel and other digs at a reasonable time to shower change eat, people waiting for us in Newbury expecting us now, needing to get in before darkness falls, and some frustration building up in me (and maybe others) at having to keep waiting for the tail to catch up so that no one got lost.

The onward route was fairly straightforward so we decided to split into two groups – a faster group who would press on as quickly as possible, and a slower group who would stay together at the pace of the slowest. Someone with the route available on a device in both groups. (One issue for me in the whole ride was that for much of the time I had failed to make sure that someone else actually had the route available and could navigate – a note for any future event, make sure that more than one person knows how to get there)

In the event of the 17 it was a group of about 10 who went ahead and 7 who took the slower option. In the lead group we managed to keep up a reasonable pace and had time for a very brief pause as we passed under the A34 Newbury bypass to acknowledge the earlier generation of Earth Protectors in the 1990’s who held the Newbury Bypass road protest camp, living in trees and trying to push back against the obsessive road building programme. Although they lost the battle over the specific road, in some respects they won the war as the whole road building programme was seriously questioned thereafter. NVDA that works.

Finally we made it into Newbury and found the Bacon Arms where some of us were staying and others were meeting their hosts at 7pm. The following group were only about half an hour behind.

In many ways it was quite fortunate that we didn’t have an event arranged that evening – a few supporters had turned up to greet us, including to my great surprise and delight Wendy and Nick, the aunt and uncle of Jenna who had come to see us off in Falmouth on Sunday. Jenna’s parents, Nick and Jane, are old very good friends, Wendy being Jane’s sister (they both married men called Nick) who I had met on several previous occasions. Unexpected connections and coincidences abound on this sort of trip.

The Bacon Arms’ cook had just had a baby so they weren’t doing food, so those of us staying in town went off to a local Thai restaurant and had a really good relaxing evening. And so to bed.